Pretty personal post ahead. But I thought it was important to share on this blog, since it is closely linked with the role fiction can play in one’s life and in one’s identity.

If you’ve been on the Internet at any point over the past three months, you definitely haven’t encountered this totally obscure Disney movie, Frozen. On the off chance you do know which movie I’m talking about, be warned that this post contains spoilers.

The moment the movie came out, every other person I talked to told me I needed to see it as soon as possible. People said it was the best Disney princess movie since Beauty and the Beast. I practically knew all the songs before I actually saw the thing. Two of my college-aged friends have seen the movie in theaters five times. I thought, whoa, this movie must be Pixar-level amazing. So I walked into the theater with extremely high expectations…

…and walked out confused. Disappointed. My sister agreed with me. The movie was trying too hard to be Tangled–the Sven character was completely interchangeable with the horse from Rapunzel’s film. Out of all the jokes in the movie, one made me laugh. One. Even then, it was just a little “heh.” I couldn’t stand Olaf (I feel so bad saying that, because he’s cute and sweet, just not funny to me). Elsa rubbed me the wrong way. Much of the plot “twists” were incredibly predictable. I was glad Disney finally subscribed to a type of “true love” that wasn’t romantic, but I just wish I hadn’t seen it coming from a mile away. Don’t even get me started on Disney’s choice to make Hans evil. Why were people so crazy about this movie?

Well, big deal, right? I don’t have to love a movie everyone else is, for some reason, obsessed with. I participated in the cultural phenomenon and now I can move on. I tend to be a harsh critic of movies in general, anyway, so this shouldn’t bother me so much.

But then there’s this: 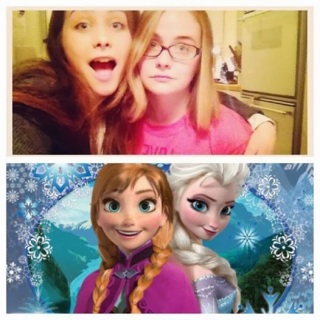 That is a picture of me and my sister, Wendy, above the movie’s sister characters, Anna and Elsa. It’s great that Anna is the younger sister and Elsa older, because as far as my sister and I go, the personalities match us almost perfectly. If someone had told me, “Hey, they’re gonna make a movie about an older sister who has emotional issues that she doesn’t know how to control and a sweet, optimistic sister who has complete faith in her,” I would have thought the scriptwriters were spying on my family.

Remember, I wasn’t a big fan of the movie. But the fact that I wasn’t a huge fan kept bothering me, long after I’d seen it. Part of it may have related to the fact that I felt left out, since everyone else latched onto it. But I’ve come up with a couple more reasons that the bitterness stuck with me:

Ariel!…and Eric. Belle!….and the Beast. Kiara!…and Kovu. These are the main characters of some of the Disney movies my sister and I watched (and acted out in front of the screen) as kids. Notice something about these movies? They’re running low on female characters. This meant that, unless one of us wanted to be one of Gaston’s fangirls or Lion King 2‘s evil Zera, only one of us could be “the girl,” and the other was stuck being the boy. Because I was the bossy older sister, I usually got to be the female character, to Wendy’s dismay.

Sure, we could have come up with our own characters, which we did. But it was fun to pretend we were characters we could see onscreen. These movies had merchandise, soundtracks we could sing to and toys we could play with. This stuff stretched the worlds further, made the fictional playground bigger. Wendy and I had a few sister movies to choose from, of course–she was the Hallie to my Annie (The Parent Trap remake), the Mei to my Satsuki (Totoro), the Mary-Kate to my Ashley (I’m not gonna list them all). But did these movies offer toys you could play with, or outfits, or dolls? Totoro has some, but not of the sisters.

If this movie had come out when we were kids, my poor mother probably would have purchased half the Frozen merchandise in the Disney store. We would have had Elsa and Anna dolls. We would have danced around singing “Do You Wanna Build a Snowman?” and “For the First Time in Forever (Reprise)” together. We would have dressed our little brother in white and called him Olaf. Heck, we would probably have started asking people to call us Elsa and Anna (we would sometimes ask people to call us by our middle names, which are close enough–I’m Morgan Elizabeth, she’s Wendy Anne).

Is it immature of me to whine about how my childhood lacked Frozen? Absolutely. My childhood had plenty of wonderful things, and I’m thrilled for the little sisters of the world who get to grow up with these characters. I’m just a little jealous of them, too.

Here comes the bigger one:

Recall how I said Elsa rubbed me the wrong way. I also mentioned that I was the bossy older sister, kind of flippantly. But I say that with some pain.

Emotions have been a big…thing for me for much of my life. If my novels are ever published, you will see what I mean. I was always the temperamental kid in the house. I had a hitting problem that I took out on my siblings. In high school, I had meltdowns. And over the past three or four years, I realized my out-of-control emotions could hurt people. I didn’t know what to do about it. I tried telling myself not to explode when I felt a freak-out coming on, but that didn’t help. It usually made it worse. This all leads up to the present day, when recently, a counselor told me I punish myself for feeling things too intensely.

I told my friend, who is the number one Frozen fan, about this counseling session. Later on, she said to me, “If you punish yourself for your emotions, why didn’t you like Elsa?”

Hm. Well, Elsa had a resolution. I’m better than I was a few years ago, but I still haven’t really resolved this yet.

One thing I knew people were wild about was Elsa’s song, “Let it Go” (which I now enjoy, though I don’t think it’s musically or lyrically strong enough to be Oscar-worthy–the best thing about it is Idina Menzel’s voice). That’s when she uses her icky feelings to construct her castle, which I could easily tie to my own novel-writing. I knew Elsa was bothering me, but I couldn’t articulate why at the time. Some part of me must have been thinking, or rather feeling, “Let it go, huh? It’d be nice if it were that easy.”

I kept thinking, no, she can’t win. She’s still hurting people. How can this song be so triumphant when “letting it go” isn’t actually the answer? The whole country or whatever Arendelle is has been plunged into eternal winter because she’s cursed with emotions that overpower her–I mean, ice powers. Later, when Anna tells her this, she acknowledges this herself: “I’m such a fool! I can’t be free! No escape from the storm inside of me!”

I identified so strongly with Elsa that she repelled me. That happened to me the first time I read Dosteovsky, too. I pride myself as someone who is willing to look at her flaws, but sometimes, I guess it gets too close and I start pushing things away.

And I have an Anna. I have a sister who loves me even though I bossed her around and hurt her. I pushed her away plenty, especially during my last two years of high school. Sure, our relationship is great now, but I can never undo any of that stuff.

Is it possible to love a character and not like the movie so much? I think so. That’s how I feel about Holly Golightly–Breakfast at Tiffany’s is otherwise not so great (please read the book; it is so much better). After three months of not understanding my reaction to this movie, I’ve settled on this stance. Frozen? Meh. Anna and Elsa? Love.

Maybe one day I will let it go. If not, I’ve still got that bitchin’ ice castle. 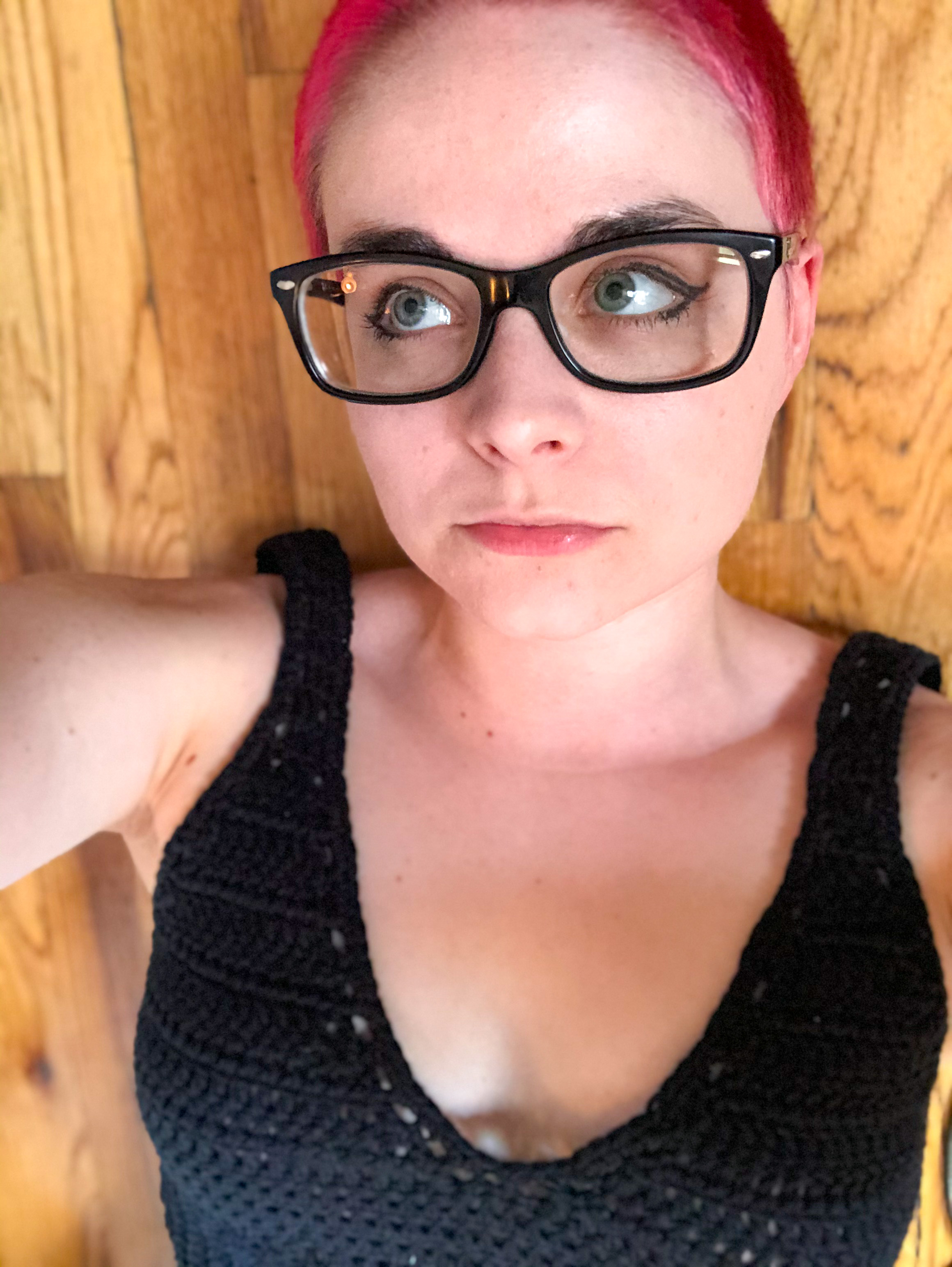